I felt a knot in my stomach. Aren’t we crazy? Going into a country at war, with our four young, innocent children?  Jelle said that we would be okay, that the war is not here, but far away. But I hadn’t told him that I just took my journal, my pen and my Bible and a few other necessities with me, in case we would n’t return that same evening.
Anyway, perhaps it was because of that knot in my stomach, or because we already had showed our passports three times, but I drove in the wrong lane and ignored the tiny house, for yet another check.

While we drove on, I suddenly realized that something was utterly wrong.

I looked in my mirror and saw an armed man in uniform, coming out of the tiny check point. His legs wide on the street and his arms open and wide in the air. As if he was saying: My goodness what is this!
We couldn’t turn, so I drove on, slowly, and as soon as we could, I turned and apologized, played the fool, apologized again, bowed our heads and respected him as being the man with authority over us. This might have been the thing he wanted to hear, because he was very cross at the beginning, but later on, let go of us.
A few things became clear for us. Who is more lucky here? The man in uniform in charge of border-security? Or we the passengers, able to speak English, with passports of an EU country?
We were on a daytrip to our colleagues Doug and Marina Landro, around 30 kilometer from the border with Hungary. We stept for the day into a different timezone, to get the hour back at the end of the day. The landscape gets a bit more relief closer to the border.

And at a certain time, when your GPS says: OFF ROAD, you know that you are close to the place where you want to be.

Doug Landro is an excellent storyteller and tour guide. And you are quite lucky if you have a local one who is showing you around. In a few hours time, Doug gave us not only an impressive overview of the history of Uzgorod, the complexity and the impact what World War I and II had on the country, but also the impact of the iron curtain and the end of it. And the impact of the current war.
While driving through this old historic city, with the many, many beautiful old trees and lanes, we asked Doug tons of questions. How is the political situation now? How many Roma live here? What do you really like about your ministry? What are the hard situations? How do you keep your boundaries as a family? What about begging? And giving of gifts or money? Which languages are spoken here? And what Bibles are used?  I cannot repeat all the answers here, but you can imagine that this was a very helpful day for us.
Doug and his team do a lot of wonderful work in Uzgurod. For example, one of the team members started to visit orphan babies in the hospital. He didn’t stop visiting them when they got older and didn’t stop following them when they became teenagers. And they started projects to protect the teens when they are ready for the street because at age 16 there is no care from the government for these orphans.
The team cleans out the rubbish in the Roma village, helps to make a better road, so that the ambulance can enter, in case that is needed. They have children and teen programs, studentprograms, English services for students and it is amazing to see so many committed people working together here.
At some point – and we found this a very interesting part- Doug talked with the small Jewish community. We saw the old Jewish part of the cemetery and it is an enormous mess. It would be wonderful to honor these people and restore this place. But it is complicated to work out all the details, so the door didn’t go open in that direction.
We had a full day of impressions and here is just a small selection of the photo’s we took. If you click on the photo, there is a little explanation.


We had a lovely meal at the Landro’s residence before we drove home. And the first ten kilometers were fine. The first guard we met at the boarder wished us: Good luck! I asked playfully: Ah, Do we need that?  The man didn’t say a word, but his eyes told us more than a thousand words. And we soon found out what he meant.
Our car was the tenth in row. All the cars before us, were full of people, but without lights or motors on. It was breath taking quiet. Every one and every piece of the car was carefully inspected. It is not hard to get images of Bible-smugglers into your mind. After nearly three hours of waiting, it was finally our turn. We all had to get out. Our bags were checked, even my handbag with my extra few little things, for just in case we would’t make it back that night. But finally we got through.
When we came home in Sventistvan late that same evening, we felt blessed. We had been away fifteen full hours. Eight hours on the road. Three to get there, seven to be there and five to get back home again.
We realized: Good luck indeed! Compared to the many, many refugees crossing through Europe at the same time. Considering the 2 million “internally displaced people” in Ukraine, because of the war with Russia.

We are on our springbreak journey (read more about here, if you like.) This was our third stop. We stayed in the place where the orange flag is. The other places are:  Debrecen (Hongarije), Oradea (Romania), Uzgurod (Oekraïne) en Sol, (Slovakia). The blue flag is home in Osijek. I try to post every day this week. This is the third post. Tomorrow: Fotoblog: Beauty is all around us. 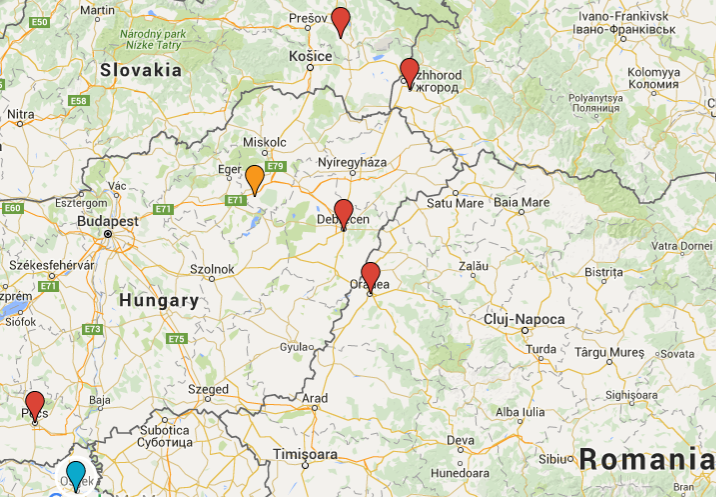